A Warning to the Curious:

Lon Chaney once said, “There’s nothing funny about a clown at midnight.” I’d add that there’s nothing heart-warming about Christmas music playing in a graveyard. Nightmares — and good horror fiction — take the things we love and infect them with the uncanny. 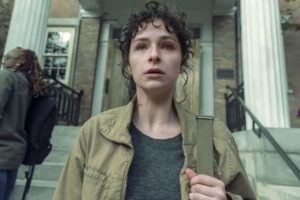 I didn’t have big ambitions for NOS4A2 … I just wanted to scare the hell out of people for a few hundred pages and give them a good little escape from the humdrum. I had this idea for a story about a car that runs on human souls instead of gasoline. The driver, Charlie Manx, has cruised the American backroads for almost a century, collecting children, harvesting their spirits, and abandoning the hollowed-out monsters that remain in a terrifying otherworld called Christmasland. In Christmasland, every day is Christmas Day, unhappiness is against the law … and the cheerful flocks of soulless kids entertain themselves with lively games of scissors-for-the-drifter and bite-the-smallest.

My Dracula of the Interstates has had it easy for almost a hundred years. But all that changes when he runs afoul of a young woman named Vic McQueen. Vic has an impossible gift and a wicked ride of her own. When she’s on her battered old dirtbike, she can find her way to whatever she’s looking for: a lost bracelet, a missing woman, a friend in need. Charlie Manx is every parent’s worst nightmare — but Vic McQueen is his. They clash and clash again, in a series of reality-bending confrontations that turn the roads into red highways.

NOS4A2 is Vic’s story: that of a young woman, born and raised in hardscrabble Haverhill, Massachusetts, with all the grit that comes of an upbringing by a loving yet violent father and a hard but caring mother. Her imagination opens her to the dizzying possibilities of the occult; her ability to see the best in others makes her an invaluable friend; and her raw courage makes her a foe to reckon with. She was a good travelling companion for me, over the years I was writing the book.

Now it’s your turn to take a ride with Vic… and with Charlie. I’m delighted (and dazzled) by the work Ashleigh Cummings, Jami O’Brien, Zachery Quinto and the entire AMC crew have done across the ten episodes of season one. Together, they’ve peeled the characters off the page and brought them to full, frightening life, for a heart-rending conflict that’s like no other horror show. What a thrill.

I hope you love it. I know I do. For me, every single episode has been like a slice of Christmas come early.