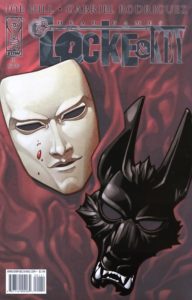 Following a shocking death that dredges up memories of their father’s murder, Kinsey and Tyler Locke are thrown into choppy emotional waters, and turn to their new friend, Zack Wells, for support, little suspecting Zack’s dark secret.
Meanwhile, six-year-old Bode Locke tries to puzzle out the secret of the head key, and Uncle Duncan is jarred into the past by a disturbingly familiar face.
Open your mind – the head games are just getting started!

The single issues were published with these cover(s):
(Click image to see full cover)

The comic is collected in these edition(s):
(Click image to see full cover)

Information about edition(s):
· Subterraneanpress made #1000 trade hardcovers, #250 signed in slipcase and #26 geletterde.
· Beside the ‘regular’ oversized hardcover from IDW they did three traycased editions: Red Label #250, Black Label #40 and Blue Label #12 stamped full with extra’s.