Back to the Keys 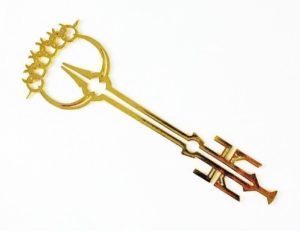 First appearance: Welcome to Lovecraft #3
Use: Allows travel to anywhere with a door
Door: Any

Bode found the Anywhere Key in Kinsey’s bracelet while in ghost form and concentrating on locating it. Kim Topher, Rendell’s highschool girlfriend bore the bracelet housing the Anywhere Key key during their high school days. Rendell later gave the key to Kinsey telling her “Believing in yourself is the key to being a complete person. If you’ve got the key it can unlock any door and take you wherever you want to go.”

The Anywhere Key was often stored in a golden bracelet. The bracelet is known to have been in the possession of Rendell Locke, Kim Topher, and Kinsey Locke. After the bracelet came into the possession of Dodge, the key was removed, and the bracelet was thrown down the well.
When this key is inserted into any door with a keyhole, the door becomes a portal to any other door in the world that the user can clearly visualize.

Guide to the known keys entry:
“Used the key to anyplaice again, to return to Boston & gather intelaigente for Crais. ‘Tis an act of terryble wychcraift, but better I do it than my sister, who is obsessed with REVENGING herself upon the RED-COATS for thair violence against our father & brother & belov’d maither: Aye, my dreadd of being called to acconnt someday by SATAN HIMSELF is a trifling concern when maiched with my desyre to rid the worlde of the devylls who taik the King’s Coyne to do raip & murdur…”